Following up on the success of 2014’s Arizona, which the Austin Chronicle hailed as a “masterpiece,” Stephen Doster’s New Black Suit is now available from Atticus Records. Below is a sampling of early reviews for New Black Suit, hailing it as a worthy successor to Arizona. Below the reviews is a personal letter from Stephen Doster to his friends and fans, including how your purchase of New Black Suit through Atticus Records can also help the relief efforts for Hurricane Harvey.

“Doster’s revelatory 2014 album ‘Arizona’ was his first release in 18 years, but its success inspired him to reconvene quickly. The results are similarly wondrous.” — Austin American-Statesman 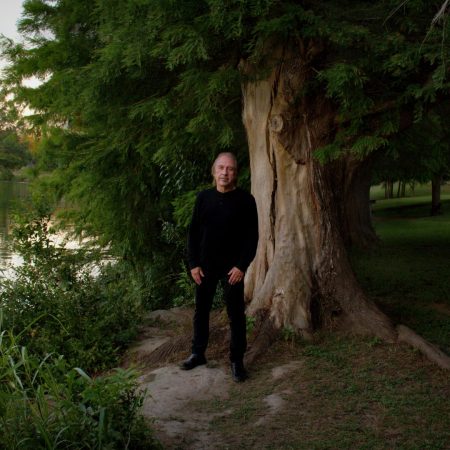 Most importantly, I hope this letter finds you well wherever you may be. Many of our family and friends in Texas and along the Gulf Coast have recently been devastated by Hurricane Harvey. Knowing this and wanting to help in some way, I am deeply touched to have found out that Atticus Records is dedicating 50% of the sales from New Black Suit for relief efforts to the victims of this unprecedented disaster. For me, it’s a true honor to be working with the fine people at Atticus, and I hope that you will help us help those affected by Harvey.

It has been a wonderful journey leading me to where I am today. I am proud to be releasing New Black Suit, which is the follow-up to 2014’s Arizona, also on Atticus Records. I simply would like to say I have been extremely blessed to be given this opportunity to make these records and am very grateful to Atticus Records for supporting me wholeheartedly throughout this experience.

I’m reaching out to you today in hope that some of you can join Atticus Records and myself in spreading the word about New Black Suit. There are many different ways to support the record, most importantly by buying a copy or buying copies to share with friends. I’d like to deeply thank you in advance for your consideration. We also realize some people might not be able to support us at the present time and I’d like to encourage you to visit my website www.stephendoster.com where there we will always have some songs available for you to hear.

To learn more about the songs on New Black Suit or to view recent promotional updates on the record, please visit my press page at Fanatic Promotion. You can also visit my website to read stories about the songs, as well as the friends and experiences that inspired them. So far, many thanks are due to Guitar World, The Austin Chronicle, Blurt Magazine, Austin American-Statesman, Magnet, KUTX FM, KLBJ FM, KOOP FM in Austin, KPFT FM in Houston, The Townsend and Austin Monthly for their support of New Black Suit.

I would like to send my deep thanks to all the musicians who performed on this record. The main group is George Reiff on bass, Dony Wynn on drums, and Kevin Lovejoy on piano, organ, and multiple other keyboards.

Guest artists include Warren Hood on violin and Brian Standefer on cello on the song “Balmorhea,” a song inspired by the spiritual feeling I get when visiting this oasis in West Texas.

Another guest artist is Devon Guliford, an extraordinarily natural singer who joins me on “Something Good” and “Love Like Summertime.” When Devon sings it is seemingly without effort and she has an ability to transparently blend into the songs like she’s been singing them her entire life.

The horn players on the record are some of the finest musicians I know. I have always had a fascination with the sound of the French horn and fortunately for me one of the best I’ve heard, Thomas Hale, lives in Austin, Texas near our studio. Thomas is the first chair French horn with the Austin Symphony. He plays on the song “Big Cars”. On two other songs, “William Melvin Hicks” and “You Should’ve Seen This Place,” I was fortunate to have Elias Haslanger on saxophone and Derrick Becker on trumpet. Elias also played on Arizona. It was great to work with Elias again and to work for the first time with Derrick.

This brings me to James Stevens who sings harmony on “William Melvin Hicks” and “Until The End.” James has been my collaborator on dozens of record at our studio, EAR Studio, in Austin, Texas. From the first notes played on this record to the final mixes James has done a stellar job recording, mixing, and generally building a sonic space and dimension for this music to swirl around in. I’m thankful to have a pal like this who is equally obsessed with making these songs come to life. From the moment he pressed ‘record,’ I felt this music was going to outlast us all.

Many of you know that our friend, George Reiff, passed away on May 21, 2017. When I think of blessings in my life I will always hold dear getting to make this record with George before he left us. The good news is that there are two more records on Atticus Records that feature George’s playing being released in the Fall, Collected Stories by Caro and The Soul Of Everything by Rick Busby.

New Black Suit is dedicated in memory of our friend, George Reiff, with love and gratitude for his bass guitar performance on the record.

PS: New Black Suit, along with my other releases, is available through Atticus Records. Click here to order your copy today.