We are on the verge of the 24th Annual John Lennon Birthday Tribute, which will once again be held at Threadgill’s World Headquarters on Thursday, October 9th at 9:00 PM. Stephen Doster leads the finely tuned #9 Orchestra through a wide range of John Lennon and Beatles classics in what has become one of Austin’s longest running annual tribute shows. 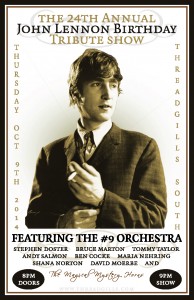 The #9 Orchestra, which Doster has led for all 24 years, features a who’s who of some of Austin’s finest musicians, including master drummer and bassist tandem, Tommy Taylor and Andy Salmon, who are Austin Music Hall of Fame inductees as members of Christopher Cross’ band. The stellar band also includes Ben Cocke, Bruce Marton, Maria Nehring, Shana Norton, and The Magical Mystery Horns.

The show, which was first launched as an idea from famed Austin radio programmer Jody Denberg has become so successful over the years that it spawned a second annual show, held in the spring, which features the music of The Beatles. The musicians enjoyed playing the music of John Lennon and The Beatles so much that once a year was not enough.

In 2015, the annual shows enter their 25th year and a video documentary is being planned to document the shows in 2015 and 2016 for a DVD release in 2017. To purchase tickets to the 24th Annual John Lennon Birthday Tribute, go here.